RADIO KLASSIK CD OF THE DAY 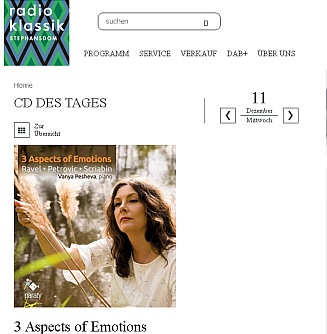 Vanya Pesheva is a Bulgarian pianist, internationally renowned soloist and chamber musician, and the founder and Artistic Director of the International Music Festival of Classical Music “Artis,” in Sofia, Bulgaria. She has given recitals throughout Europe and Asia, made recordings for radio and television, and offered masterclasses in Switzerland, Luxembourg, and Macedonia. Pesheva recorded her first album in 2010, Piano Sonatas, which includes works by Beethoven, Schubert, and Rachmaninoff.
In her latest recording, 3 Aspects of Emotions, Pesheva performs selections from Ravel, Scriabin, and Luxembourgish composer Albena Petrovic. I asked her about her incredible sound, her program choices, and what she hopes listeners will take away from her performance.

Q: On the introduction to your website (vanyapesheva.com) you write about music as your vocation. I wonder if you would tell me a little about your background. When or how did you know that you wanted to make music your life and career?

VP: Music has always attended my life vividly. It was not necessary for me to decide; I just had to follow the path fate had willed, a choice made for me in my early childhood. I started playing the piano at six with the help of my mother, who has a good ear for music. I remember that even before that age I tried to play any toy instrument I had. As a child, I loved going to music bookshops, spending hours on end turning over the note pages of different pieces of music. I imagined playing them and I could hear the music. There is no other feeling as unique as to open the piano and submerge one’s self into the music, no matter if it is Mozart, Beethoven, Rachmaninoff, or Chopin—to forget where you are, who you are, just to become a particle of that divine spiritual energy, trying to recreate it through magnificent sounds in the real world.

Q: The title of this album is 3 Aspects of Emotions. And although the number three seems to be an interesting and recurring theme throughout the album, I was wondering what this title means to you. What are the three aspects of emotions? And do you look for these emotions in everything that you perform, or are these emotions specific to the particular pieces you’ve selected for this album? (In other words, do you carry these three aspects of emotions in every performance, or do different pieces bring out different aspects?)

VP: I wouldn’t say we should search for any symbolism in number three. These are rather three figurative-emotional sound and stylistic spheres (three aspects of emotion)—Impressionistic, Expressionistic, and Postmodern, with some elements of Western European Minimalism.
As to the question of whether I search for emotions in everything I play, I would say that the entire process of music interpretation is strongly connected with our spiritual, intellectual, and emotional natures. Any musical work eminently reflects the immensity of emotional psychological states, and the palette of this emotionality is extremely rich.

Q: Before I ask more about the context and complexity of the pieces you’ve recorded, I want to briefly gush about how much I love this album. Truly, if I could define my own personal aesthetic (in terms of my favorite sorts of books, music, or moods perhaps), I would say this album represents the kind of sonic landscape into which I would gladly wander. I can’t say that I am madly in love with this album only because of your program choices, however; you’ve crafted such a compelling and mesmerizing sound that it is quite a beautiful gift for the listener. I wonder if you might explain or describe a bit of your process in terms of sound production. When do you know that you’ve achieved the kind of sound you want for a recording or a performance?

VP: You perceive my CD as a sonic landscape and that makes me extremely happy. In fact, I would like the album to be associated with a profusion of sound expressiveness, sound magic, and emotional conditions. As for the sound, I believe that all genuine musicians can really hear the music they play with their souls and all their senses. They can hear it in details and as an entirety, how it is being dramaturgically built, with all its components. Of course, the sound is the most important of all, as music is primarily the art of sound expression, recreating life in vivid sound images and originally reflecting the dynamics of emotions.

Q: Although Albena Petrovic’s Mirages were each written at different times, there is very definitely a linking sound—a ringing bell. (…je t’attends la, a la fin de l’hiver was written in 2017; …encore loin, plus loin, plus loin was written in 2016; …Sevdana’s tribute was written in 2016; …et la dance de nos ombres was written in 2019.) These Mirages are incredible, and I am sorry to admit that I had not heard of Petrovic or her work prior to this interview. I wonder if you could tell me a little more about these pieces. In my research, I learned that you gave the premiere performance of …Sevdana’s tribute in 2016. The ringing bell, or chime perhaps, is present in the first three Mirages, but not the fourth, …et la dance de nos ombres. Were you ringing a bell, or was it an electronic sound added later?

VP: Albena Petrovic is a typical representative of late Postmodernism. Her music style is very easily recognizable. It contains characteristics of, at first glance, incompatible Postmodern trends. First, it is the cult of searching, strongly influenced by New Simplicity and the pursuit of reduction, grounded by the maxim “less is more.” Some elements of Western Minimalism co-exist with very rich timbral finds concerning sonority. As you can hear, static meditative moments are in a continuous dialogue and interaction with masterly dramatic passages. But here emotion is subjected to reason, as action is preceded by observation. Quite impressive is the fact that the thematic material, which is extremely limited, includes the use of new, nontraditional sounds, produced by small exotic instruments (Tibetan bells) and nonmusical objects. Albena Petrovic’s music is characterized by skillfully controlled states, a multi-layered sonic palette as well as total use of the technical and artistic skills of the pianist.
I would like to share some quotations from the composer, so you can get a clear idea of Mirages. In my email correspondence with Albena, she wrote: “I started several notebooks with preludes by calling them ‘mirages,’ ‘dreams,’ for solo piano. Mirages are a kind of dreaming, ‘onirique,’ an escape from reality. The content of the poetic piano genre ‘prelude,’ inspired by Debussy and Dutilleux on the aesthetic side, and by the idea of Neue Einfachkeit and elements of European Minimalism, the reduction of the thematic material, is compensated by enrichment of the sound and color. Static and Minimalistic atmosphere of contemplation is succeeded by highly virtuous and dramatic moments. The small percussion instruments are naturally involved in the sound characteristics, giving a special exotic atmosphere.”
Discussing her Mirage … encore loin, plus loin, plus loin, op. 179, Albena continued: “The reference to Impressionism is direct, but the crystalline side and the ‘transparency’ mentioned in the character show a desire to simplify the texture to the minimum. Here is the decision to amplify the magical side, and the ‘fog’ becomes more dense with the timbres added to the piano sound—the percussion instruments—the Tibetan bowls and the metal bells.” And as for Mirage … je t’attends la, a la fin de l’hiver, op. 195, Albena again explained: “The pre-apocalyptical content in the gothic sense of the word is very present, and not only is it a ‘Sad prelude’ but it is a tragical prelude. For me the winter is a symbol of coming Apocalypse, a Tragedy, a Terror—a kind of Dark premonition.” Albena wrote Mirage … Sevdana’s tribute, op. 178, for the “Puplinge Classique” Festival in Geneva, where I was invited to play in 2016. She dedicated it especially to me. Mirage … et la danse de nos ombres, op. 211, is inspired by the irregular Bulgarian dance rhythm as well as by a specific sound material with micromodal construction that adds some exotic fluidity, combined with percussion elements. It was written especially for Paulello’s piano, Opus 102, and the recording of my CD. The specific registers of the instrument, namely 102 keys, sound in the piece.

Q: And then, I’ll just conclude by asking what’s next. How have you been coping with the current health crisis? Do you have plans for future performances or recordings?

VP: In conclusion, I can say that we all are having a hard time, but it is a time for revising life values, to find the right direction of development, communication, and existence. I truly believe that the world will overcome this crisis and will become more humane and spiritual, with more kindness, harmony and love. As for my plans, I will continue sharing with people the music I love on the stage and in life.

Vanya Pesheva’s album, 3 Aspects of Emotions, is the coor of my soul. A mixture of literary references to Freud’s definition of the uncanny; complex, dark, and ruminating chords; the blue-purple hue of F♯ Major (according to Scriabin’s synesthesia color wheel); and the Postmodern, contemporary heartbeat of a bell ringing over the soundscape of several interconnected mirages all swirl together to form this fantastic album. Albena Petrovic is my new favorite composer and Vanya Pesheva my newly crowned favorite performer. You may wonder at this overzealous reaction. Let’s pause, let’s allow for time so that I can provide some rational explanation.
First, there is Ravel and that dastardly Gaspard de la nuit. This trio of pieces is a set, based on poems written by Aloysius Bertrand in 1842. The character of Gaspard is a storyteller, one who offers glimmers of truth from strange and difficult stories: the water nymph, the gallows, the mischievous goblin. Pesheva settles into each character, each piece, with a steadiness and confidence that rings out from her pressure on the keys, her clarity (even amid the reverberations of sounds sustained by the pedals), and dynamic and dramatic momentum.
Second, there is Alban Petrovic and her haunting Mirages. The heaviness of this music, already so imbued with silence and pauses and quavering notes, is further underscored by the ringing of a small Tibetan bell. These pieces have such a mysterious quality that, as a listener, I want to maintain that mystery by not attempting to qualify or interpret. The music is times atonal and dissonant, but Pesheva still maintains that compelling momentum established with her performance of Ravel. She sits with the stillness and the spaces between notes, allowing for the sometimes competing sounds of the left and right hands to coexist without overwhelming the listener.
And third, there is Scriabin’s Sonate No. 5—bright, swirling, with a theme that seems to tumble smoothly but then devolves into a syncopated picking of the keys. Pesheva plays all three movements together in a gesture both sweeping and defiantly modern.
In her interview with me, Pesheva seems to credit much of her sound production to the challenges and joys of performing on Stephen Paulello’s piano “Opus 102,” but I think she’s probably being a little unfair to herself. This music is a challenge on any instrument. And for an instrumentalist with her skills, her touch of the keys and attention to the details that make this music so challenging, she not only meets a repertoire worthy of her skills, but finds an instrument matching her own expression of nuance and complexity.